Did you see the scene outside the Supreme Court as justices heard arguments about abortion in the case of Dobbs v. Jackson Women’s Health Organization? Our nation is clearly deeply divided on this issue. Polling demonstrates it as well. For those who say abortion is morally acceptable, there are an equal number who say it’s morally unacceptable. However, there’s no debate that since the Roe v. Wade decision legalized abortion, marriage and childbirth have declined dramatically. That raises some serious questions about our national values and priorities.

At issue is a new law in Mississippi that bans abortion after 15 weeks of pregnancy. A decision finding this new Mississippi law constitutional will fundamentally change the abortion industry in our country, which has been defined by Roe v. Wade since 1973.

Surveys show the nation evenly split in attitudes toward abortion. Per the most recent poll from Gallup, 47% say abortion is morally acceptable and 46% say it is morally wrong, morally unacceptable.  Forty-nine percent self-identify as “pro-choice” and 47% as “pro-life.”

Abortion is really a bellwether issue that shows the profound split in our country regarding worldview. Abortion forces us to ask ourselves really deep questions. Who are we as a nation? Do we believe in moral absolutes? Do we see our culture grounded in traditional, biblically sourced standards of good and evil, right and wrong? Or are we a nation defined by secular humanism, moral relativism, where the center of the world is not God but man? Not God, but me.

Since Roe codified legalized abortion into our national law, we have profoundly moved toward becoming a childless and unmarried nation. Over the last 48 years this constitutionally codified abortion issue has been really bad, since then the percentage of American adults who have never been married has quadrupled as has the percentage of babies born to unmarried mothers.

Are we as a society agreeing with the left that women are “empowered” by being free of responsibility to bring into the world the being that is growing in their womb?

Are we as a society saying that using abortion as birth control is necessary for women to achieve?

There is a certain irony among the proponents of abortion, many of whom are willing to stake everything on keeping it legal in America through every month of pregnancy, and some on the left are even pushing for infanticide.

I find it really interesting that while many of these same proponents of abortion are the same in our society obsessed with racial and gender equality and equity, that they are not at all bothered by a culture in which men and women use each other as sexual objects, and then demand for women to be free to destroy that child that might result from a sexual encounter if that birth could lead to responsibilities that she doesn’t want, they might disturb her career.

Frankly, on this national question of legalized and codified abortion, in my view, there is really only one question we must resolve.

The question of “is life sacred?”

If the answer is yes, then it is sacred in and out of the womb.

If we conclude it is not, our society will continue down this dark road to becoming a nation without children and without conjugal marriage.

A society where the only love is self-love – and, unfortunately, a society then without a peaceful and prosperous future. 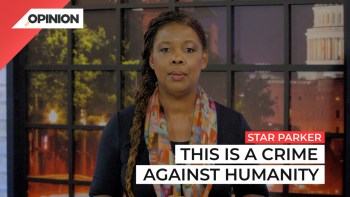