The best strategy for Democrats in 2022? Let the GOP tear itself apart

The continued divisions and feuding within the Republican Party could be great news for Democrats as they head into the all-important 2022 midterm elections. Conventional wisdom and past political history suggest Democrats will lose control of the House, costing them their slim control of Congress. But the ongoing fighting inside the GOP could be a wild card aiding liberals’ re-election efforts.

The Republican Party is in a brutal tug-of-war between the fire-breathing, headline-making MAGA members such as Marjorie Taylor-Greene and Madison Cawthorne and more traditional conservatives like Liz Cheney. For a growing number of Republicans, unwavering support of Donald Trump is the only credential that matters. It doesn’t matter who you are or how prominent a GOP figure you’ve been in the past. If you don’t blindly back Trump, you’re the enemy. Trump loyalists are lining up to primary Republicans deemed not loyal enough to the former president or those who did not support his efforts to steal the 2020 election. Trump’s massive campaign war chest is also ready to be used to arm these “payback” campaigns.

Not even former Senate Majority Leader Mitch McConnell is immune to this.

Donald Trump over the last year has been very critical of Mitch McConnell, blaming him along with everybody else for everything bad that has happened to Trump. And a number of the pro-Trump Senate and House candidates that have been declaring candidacy for 2022 have said they wouldn’t support Mitch McConnell for Republican leader in the Senate. Now, of course in the House, they don’t get a vote, but still, having many Republicans in the House and Senate that don’t support Mitch McConnell isn’t something the Republican establishment is going to want.

The GOP’s tent more closely resembles a three-ring circus than an actual political party. Rep. Adam Kinzinger (R-IL), a vocal critic of Trump and a member of the Jan. 6 committee like Cheney, has essentially been forced out of his own party. He’s viewed as a traitor for joining the House select committee investigating the January 6 insurrection at the Capitol. The pro-Trump Republicans will tolerate no dissension.

That is great news for Democrats, who frankly need all the help they can get when it comes to running campaigns. All they have to do is let Republicans keep fighting themselves, tearing each other down, and it could hurt them come November.

There’s a really interesting and growing level of infighting happening within the Republican party. And my advice to the left has been that this should be encouraged to any extent that it can be. We have spoken many times before about the sometimes lack of competence of the left in terms of running campaigns, in terms of really taking advantage of the weaknesses of the right and a lot of unforced errors for the left. And of course, I want the left to do as well as possible. And a lot of that would be by the left doing things correctly. At the same time, I would welcome the right, doing things incorrectly and damaging themselves. And there’s a real opportunity right now to see serious self-inflicted damage done by the right to itself. And the crux of this conflict happening on the right is pro versus anti-Trump Republicans and we’re seeing this in a bunch of different places at this point in time.

Donald Trump over the last year has been very critical of Mitch McConnell, blaming him along with everybody else for everything bad that has happened to Trump. And a number of the pro-Trump Senate and House candidates that have been declaring candidacy for 2022 have said they wouldn’t support Mitch McConnell for Republican leader in the Senate. Now, of course in the House, they don’t get a vote, but still, having many Republicans in the House and Senate that don’t support Mitch McConnell isn’t something the Republican establishment is going to want.

That’s a good thing for the left because that’s fighting that takes their ability, uh, their attention off of fighting the left. And instead, they fight within themselves. Now earlier, in December Mitch McConnell was asked, has he been paying attention to the house committee investigating the Trump riots now that we’ve seen all these texts and Fox news people involved texting Mark Meadows. And he said, he’s interested in seeing everyone who was involved and responsible, no hedge, no caveat, no, no whatever. So it’s increasingly looking like Mitch McConnell might be ready to let the pro-Trump Republicans burn. And that’s a really great thing.

Then we go to right-wing media. In right-wing media. We are also seeing a split along pro-Trump and anti-Trump lines. One example from December, there was a segment on the Sean Hannity program in which Sean Hannity brought on Geraldo Rivera, a supporter and a friend of trumps as he describes himself, and a right-wing pundit called Dan Bongino.

Bongino is the relentless, never-ending Trump supporter. And they got into an argument where Sean Hannity again, even though we, we saw Hannity’s texts on January 6th saying this is terrible and it looks terrible for Trump, Hannity again, started downplaying the, the role of Trumpists in the Trump riots and Geraldo interrupted and said, “Sean, think back to when you were writing those texts, you know what happened on that day.” And Dan Bongino went nuts, calling Geraldo a backstabber and that he’s abandoning the president and all these different things. That’s another rift now, thanks to the Mark Meadows role in the Trump riot investigation, which is within right-wing media there is now a conflict that is taking place as well. And then lastly, uh, within the House of Representatives and this one really could be the undoing of Trumpists. The Trumpian wing of the Republican party needs to get some wins in November of 2022.

The biggest Republican civil war right now is taking place in the House of Representatives where you straight up have people like Liz Cheney and Adam Kinzinger, who think that the Trumpian nuts are as I suggested, absolutely off the wall bonkers. People like Boebert, Madison Cawthorne, and Marjorie Taylor Greene, they are almost far enough apart that they could be in different parties. Now, my last message on this to the left is encourage the conflict, but don’t fall victim to the false notion that these slightly more reasonable Republicans are our friends. Liz Cheney, and Adam Kinzinger voted with Trump’s position on almost everything while Trump was still in office.

They also believe Joe Biden won the election. And so the point here is on some basic uncontroversial fact, like who won the election, we’ve found a few people in the Republican party that understand, accept and will espouse the truth. Joe Biden won, but they are still, at the end of the day, Republicans with whom we disagree on just about every topic. And so let’s not falsely see them as allies. We should see them as a means to an end. The more that that fighting happens within the House of Representatives, the more likely it makes it that they’ll be so worried, fighting each other, that they won’t run good races against Democrats. And maybe Democrats can keep the House in November of 2022.

The X factor that’s not looking good is that because of redistricting, there is going to be, the latest I’ve read is a minus-five shift for Democrats in terms of safe districts, just because of the redrawing of districts after the census. And that’s like a systemic factor, that very much favors Republicans in November of 2022. 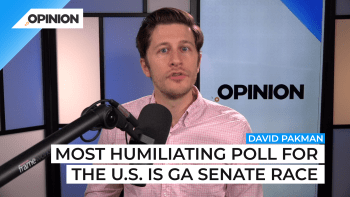